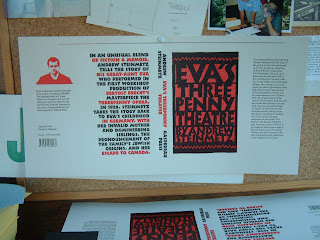 In an unusual fiction about memoir, Andrew Steinmetz tells the story of his great-aunt Eva who performed in the first workshop production of Bertolt Brecht’s masterpiece The Threepenny Opera, in 1928. Steinmetz takes the story back to Eva’s childhood in Germany, with her invalid mother and domineering siblings. Her training as an actress began just after her graduation from high school, and her introduction to the philosophies of Brecht and his contemporaries soon followed. With the pronouncement of the family’s Jewish origins, both Eva and her brother left Germany to escape Nazi rule, Eva eventually settling in Canada.


In their sessions with the tape recorder running, we see Steinmetz’s own life as it intersects with Eva’s, and his changing perspective on her life and work. Tied together with threads of Brecht’s play, Steinmetz presents a life lived as though the world were a stage. A fictional tribute, Eva’s Threepenny Theatre is as much concerned with what happened as what might have or was imagined to have been.


“I’d known Eva since childhood,” says Steinmetz, “and always in the back of my mind was this story I’d heard about her and The Threepenny Opera. I didn’t know much about Bertolt Brecht, initially, but in my early twenties I was a songwriter and one night while I was in the studio recording, I got to talking with the engineer and later he pulled out a record of Lotte Lenya singing ‘Seeräuberjenny’ and ‘Kanonen-Song.’ That was it. Lenya’s kitsch and the killer instinct: Eva talked like that. The droll, aloof, harsh cabaret style is incredibly moving, to me at least, something which seems to work almost despite itself. It was easy to see Eva as a product of Weimar Germany, of that precise period evoked by these songs. So I guess the initial and strongest connection between the novel and Brecht was through the lyrics he wrote for this music. As a socialist playwright, Brecht wouldn’t touch naturalism, seeing it as an endorsement of a bourgeois or genteel world view, and I have to say, as a writer, I could never approach writing a family memoir wearing a straight face. Eva was schooled in Brecht, and so it felt right that the novel’s form would reflect that, and at the same time bring about some genre consciousness. I also wanted some sort of emotional arc despite putting up with ideas of alienation and detachment. If this makes it sound like I’ve been working at cross purposes for the past fifteen years, which is as long as I’ve been at it, then that’s exactly right.”


This book is a smyth-sewn paperback. The text is typeset in Sabon and printed offset on laid-finish paper making (estimated) 256 pages trimmed to 5.3 × 8.5 inches, bound into a paper cover and enfolded in a letterpress-printed jacket.
Posted by Andrew Steinmetz at 11:30 AM