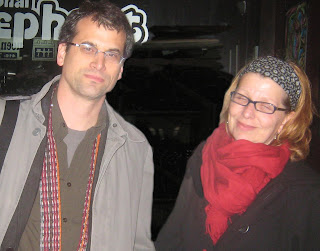 In April, I met Bertolt Brecht’s granddaughter, Johanna Schall in Toronto. I was in town for the warmth of the Pivot Reading Series. That same night, Schall was directing a University of Toronto drama school performance of The Misanthrope at The Drake Hotel. Here we are on Queen Street at 1 AM, after we'd found and shut the next whiskey bar, Oh don’t ask why.

And here is a modern day story: Johanna and I became Facebook friends, first; drinking partners, second. During our real-face-time together, we discovered that Johanna's first acting role in Germany was in a play directed by a member of the Paryla clan (My great aunt Eva's first husband was Karl Paryla). In her youth (she is 51), Schall told me, she avoided reading grandfather Brecht's material. Well, as she is an actor and theatre director, I can only imagine the towering anxiety of influence she must have felt growing up. Today, she said, she is disappointed that much of Brecht's fame rests on his reputation as a communist and on his chilly doctrine of alienation and detachment: that isn't what's important, she insinuated. Perhaps his communist standing is a red herring, after all.
What was important for me was just to meet Johanna Schall! Forget B. Brecht. Johanna answered my Facebook tap on the shoulder promptly. Sure we could meet. She was interested in Eva's life. As a person, Schall was disarming, frank, generous, curious and hip. She'd spent her time in Toronto going to clubs and watching live bands. We talked mostly about Rufus Wainright and the genius of Robert Lepage. We'd both recently seen productions of Lepage's The Blue Dragon. On Canadian theatre in general, Schall had this to say: it's far too earnest, far too polite. Sounds familiar, doesn't it? Only just a bit like the cautious middlerangeness of CanLit.

Posted by Andrew Steinmetz at 7:30 AM