It was inspiring to find a recent post about Eva's Threepenny Theatre by Cristina Pietropaolo at The CanLit Thing, just as I am finishing up a book about Eva's son, Michael Paryla. Michael was an actor like his mother and father. Before his death in Hamburg, in 1967, he had a small part in John Sturge's The Great Escape. Actually, he played a Gestapo agent; and here he is on a train in the movie about to have words with Richard Attenborough and David McCallum: 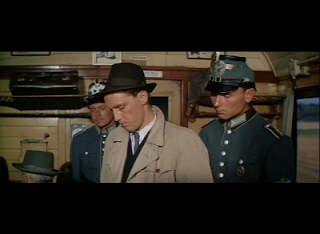 In Eva's Threepenny Theatre, I give only a page to Michael's story. I have spent the last five years finding out about him. The book will be called This Great Escape - The Case of Michael Paryla.
Posted by Andrew Steinmetz at 1:24 PM