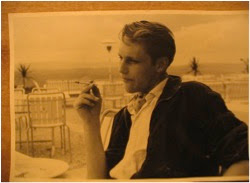 “I knew two things about Michael growing up. I knew he had been in the movie The Great Escape.”


“I also knew that he died of an overdose.”

That Paryla’s family was partly Jewish and had fled Nazi Germany and that he had played a Gestapo agent in a movie heightened the intrigue for Steinmetz.
Read on...

In other news... Arsenal won their game with Sunderland 3-1 this morning. Mesut Özil!
Posted by Andrew Steinmetz at 9:12 AM