Here is a book to add to my holiday gift basket: The Great Escape - A Canadian Story (Dundurn Press) by author, journalist and broadcaster, Ted Barris.

"What most casual readers, history buffs, moviegoers, and even some who participated, don’t readily acknowledge is that The Great Escape was in many ways “made-in-Canada.” In The Great Escape: A Canadian Story, bestselling author Ted Barris recounts this nearly mythical escape operation through the voices of those involved, many of whom trained in Canada, served in RCAF bomber and fighter squadrons, were shot down over Europe, imprisoned at Stalag Luft III, and ultimately became co-conspirators in the actual Great Escape. 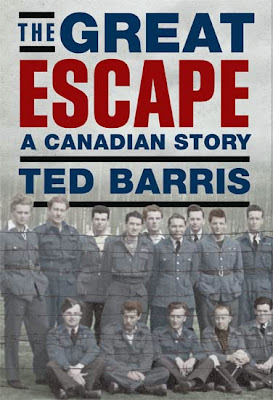 Based on his original interviews, research, and assembly of memoirs, letters, diaries, and personal photos, Ted Barris reveals that many of the escape’s key players – the tunnel designer, excavators, forgers, scroungers, security and intelligence personnel, custodian of the secret radio, and scores of security “stooges” and sand-dispersal “penguins” – were all Canadians."

Watch author Ted Barris' interview on Mansbridge One on One
Posted by Andrew Steinmetz at 8:28 AM